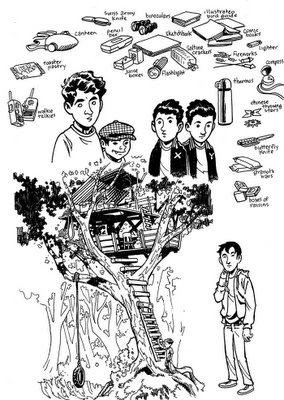 This sketch is of some kids I have in mind for a story that I'll some day get around to doing. It's sort of a Narnia meets Goonies thing that's been floating around in the back of my brain for a year or so now. I included some sketches along these lines in my 2005 Convention Sketchbook. I think I'll probably post those pages later this week. I knew they had a cool tree house but this is the first time I've gone about drawing it. I'm sure it'll see many variations over time. The labeled items (kind of a Richard Scarry homage) are different things you'd find in a kids bag if he were packing for an adventure. I used to pack a twelve foot length of rope--just in case I needed to swing back and forth under a low branch. I decided not to include that. Because these kids are dorky I probably should've packed their D&D Monster Manual.
Posted by brian hurtt at 10:23 PM

Criminy, you're a good drawer.

I love the twins with the "X" and "Y" on thier jackets! Cracks me up!

Sounds like it would be a fun project, every kid wanted a treehouse like that and wanted to go on an adventure. Hell, I still do.

Narnia? Cool. Goonies? Nice! Sounds win, win to me. And that tree house sketch is great!

Narnia? Cool. Goonies? Nice! Sounds win, win to me. And that tree house sketch is great!

Yeah, it's Narnia without all the Jesus allegory and Goonies but goonier. I'm definitely going to post some more of that stuff in the near future. I'm glad you liked the tree house sketch--I'm rather fond of it myself.
Glad you dropped by! Don't be a stranger! I see that you've started a blog as well. I'll be putting you and J in my link section when I next update.