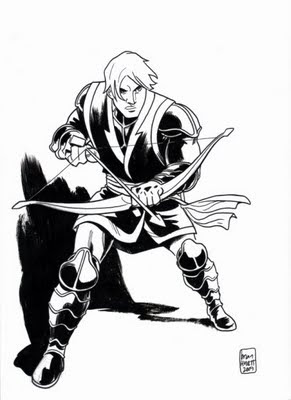 Here's a con sketch from the Windy City show I did a few weeks back. It's Ronin from the New Avengers and I have to admit I was unfamiliar with this character until this sketch (it's been a few years since I read any Avengers). But I was won over by the guy having a bow and arrow--'cuz archers are cool characters to draw. Cool but hard. Anyway, I think he turned out pretty good.
I hope update pretty soon but I'm currently in Portland visiting Oni Press and friends. I have some new commission posts coming up in the near future.
Stay tuned!
Posted by brian hurtt at 12:30 PM 2 comments: