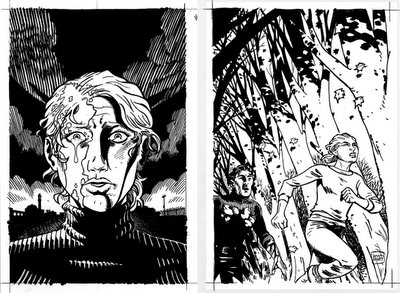 I recently did a cover for the Oni comic Queen & Country #29(with which I have a history). I was real gung-ho to do this project. I'm a big fan of the series and I was really excited about the opportunity to draw Tara Chace again and to do it in full color. I started out with four thumbnails (I apologize for not showing them here--I can't find them anywhere) and then the editor and I narrowed it down to two images. I then did tighter pen sketches of those two images (see above). (Note: those sketches were about 5"x7.5" and done using the fabulous Uniball Vision pens). At the same time I sent those in I sent in color treatments on both so they could see where I was planning on going with them. 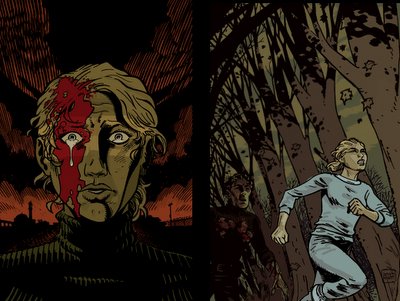 I was really on the fence about which of the two covers I preferred. I really liked the surreal, spooky ambiance of the jogging image but at the same time I liked the iconic portrait shot of Tara. It was decided that the portrait worked better as a cover image and I think I agree with that.I went ahead with the final and as you can see it's really no more than a cleaner, slicker version of the pen sketch. 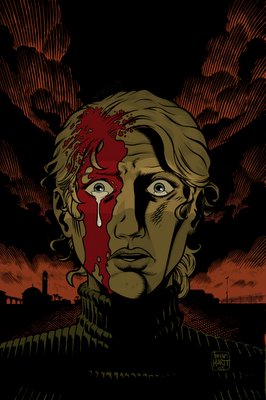 It's not usual for so little teaking between a sketch and a final. I even pretty much kept the exact same color scheme. I did send along an alternate monochromatic red version of the same image but it was decided that we'd stick with the original color scheme. 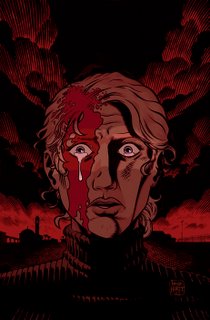 I had a blast doing this for many fanboy reasons but the most significant reason was that this was the first time I've ever seen a piece from start to finish. For good or bad, it was the first time I've ever been able to color a piece the way I wanted to see it. As far as I know I'm supposed to be doing all the covers for this story arc (3 or 4 more issues, I believe) and I'm twitching with anticipation. Twitching, I say!
Posted by brian hurtt at 1:08 AM

Nice work, Brian! I look forward to seeing the other covers!

I think you're in for a treat on this story arc. My friend, Chris Samnee (Capote in Kansas), is doing the interiors. I've been fortunate enough to see the pencils for the first ish and I have to say they're gorgeous!