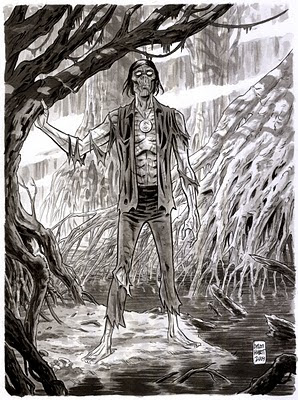 Back in the 70's Marvel Comics published a bunch of black and white comics in magazine format.
There was a Hulk book, a Conan title, Kull but perhaps most notable were the horror mags. Books like Haunt of Horror, Tomb of Dracula, and Tales of the Zombie. These horror titles (published in this magazine format to avoid the Comics Code Authority) featured such classic Marvel characters as Brother Voodoo, Blade and Morbius. It was Tales of the Zombie that first introduced us to Simon Garth, The Zombie. Up until I was commissioned to do this piece I had always just thought of him as the zombie from the Marvel mag--I was surprised, and a little amused, to find out that he had a name. I did my best in this piece to capture the swampy, gothic vibe of the 70's mags. I'll leave it to you to decide if I did the character any justice.
Posted by brian hurtt at 9:04 AM 8 comments: 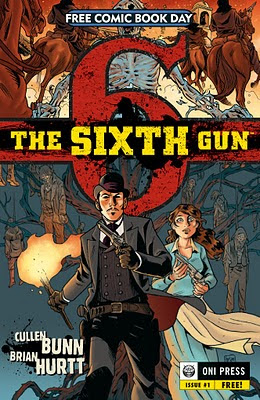 I've been out of town and out of the loop for over a
week so that might explain how I missed this:
It's official! Last week Oni Press announced on their blog that
issue #1 of THE SIXTH GUN will be absolutely FREE as part of this year's
Free Comic Book Day offerings! I couldn't be more excited about launching the book this way! Be sure to head to your local comic shop on May 1st to pick up your copy!
Happy New Year!
Posted by brian hurtt at 1:56 AM 4 comments: