One Ring to Rule Them All 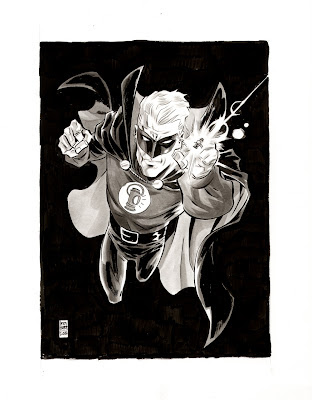 I'm thinking about just doing a whole series of JSA drawings in advance of my next show. They are so much fun to do and it seems for every one I do I have 3 or 4 other people trying to buy it off me. I hadn't realized how deep the fan base for these characters are. Of all the JSA characters, the Alan Scott Green Lantern is probably my favorite to draw.
Posted by brian hurtt at 11:46 AM 2 comments: 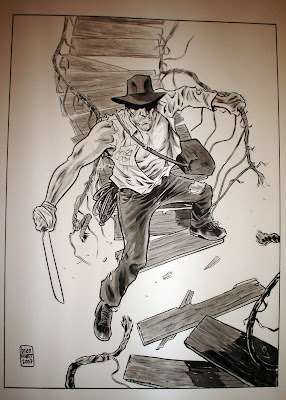 Here are some photos of a couple drawings I did this past weekend at Mid-Ohio. I had a lot of fun with both of these. Was a little nervous about doing an Indiana Jones piece but I think it turned out all right--I don't think I brought any shame to the franchise...I'll leave that to the professionals. 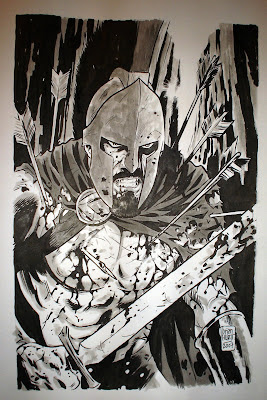 On a completely unrelated note: I've recently become obsessed with the TV show "Journeyman". In my opinion, it's the best new show of the season. Maybe even the best on TV right now. I'm telling you this because although it's ratings are slowly moving up, the show still hovers on the edge of cancellation. I had no interest in this show when I first saw the early promos and did not plan on watching it (even though it does star Kevin McKidd/Lucius Vorenus from "Rome"). To me the show looked like a rip-off of Quantum Leap. Then, one week, I left the TV on after Heroes and ended up catching the second episode. I was surprised--it actually wasn't that bad. Still seemed like a bit of a weekly formula show, but at least it was a well written, well acted version of one. So I let myself watch it again the next week. After the first few episodes this show revealed itself to be much more than I had thought at first. By the fourth episode you'll be hooked. There is a really interesting mythology being built on the show and the writing is never cheap or not well thought through. Little things that seem incidental in one episode will have impact in later episodes. Things have consequences. That seems obvious but so many shows reboot every episode to the status quo. This show keeps growing and is exciting in the way that only Lost is to me. It keeps you guessing about what's going to happen and about all the possibilities the concept offers. Anyway, I'm really going on here. Just trying to spread the word. To give you an idea where I'm coming from, what my tastes are, here's a list of some other TV hour-longs I heart: House, Friday Night Lights, Pushing Daisies, Lost, Heroes (not so much this season), The Closer, and Life.
So watch it if you can (if there is any way I highly recommend starting at the beginning) and if nothing else check it out on dvd.
I'll now step down from my soapbox.
Posted by brian hurtt at 10:48 PM 1 comment: 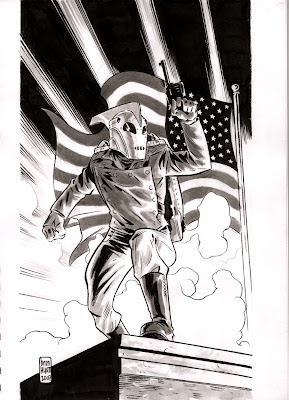 Just returned from a successful weekend at the Mid-Ohio Con. I could've stood to sell a few more books (not that I did badly) but I did very well with commissions. I was as busy as ever and had to turn down some requests--even after doing several in advance of the show.

Here are two of the commissions I did recently--one in advance and one at the show. The Rocketeer was pre-ordered and I definitely took my time with this one. This drawing was to be the first page in a Rocketeer sketchbook and I wanted to do my best to get the book off to a good start. No pressure, right? The other drawing is Jenny Sparks, from the Authority, of course. Not, as some may have conjectured, Tara Chace with a nasty case of static electricity.

As always, if you had a sketch done at the show and you have the ability to scan your drawing and send it my way, I would much appreciate it! 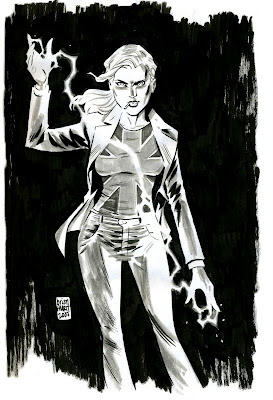 I'm leaving tomorrow and headed to Mid-Ohio Con in Columbus. I'm dragging along a bunch of Damned trades and commissions that I did in the past week. Can't wait to post this batch of sketches--I'm quite proud of them. Also joining me in Ohio will be my friends Chris Samnee and Matt Kindt. I know they are both taking sketch commissions at the show so if you're planning on going you should drop by their individual blogs and check out their offerings.

Looking forward to seeing some of you this weekend at the show. The rest of you--I'll see back here next week!
Posted by brian hurtt at 11:12 PM 2 comments:

Put on Your 3D Glasses for Full Effect 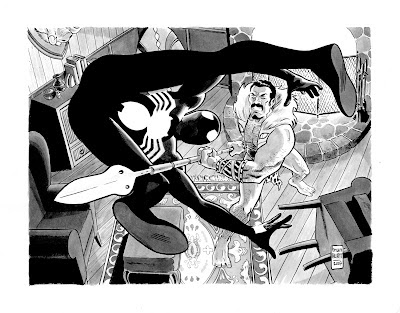 Been holding onto this one for a while. I always wait until the recipient of the actually receives the commission before posting it. As a rule I don't send ahead scans either--I believe that the first impression of the piece should be a tactile one. No matter how good the scan it never fairly represents the original. Unfortunately, this one took the long way to the owner--it was lost in the mail for about a month. Poor guy new the piece existed, new it was on the way, but had not actually seen it yet.
On an up note, when it finally showed up, it was on his birthday. Happy birthday, Sean!
Posted by brian hurtt at 9:32 AM 13 comments: 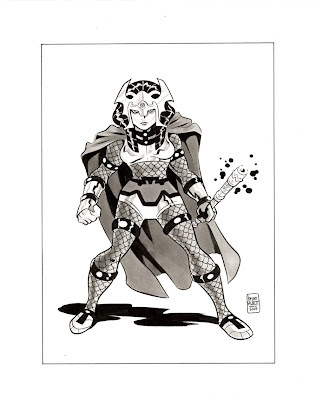 Thanksgiving is right around the corner and so is the Mid-Ohio Con in Columbus, Ohio (Nov 24, 25). If you can make it, please do stop by and say hi!
I'll be taking commissions all weekend and my current asking price is $50 for a single figure, inked, with grey wash tones. If you're the type who likes to plan ahead, and knows they want a sketch from me (I've already heard from a handful of you), then I'm giving you the opportunity to save a little cash. If you would like to pre-order a commission from me before the show I'll knock ten dollars off the normal price( that makes it $40 a drawing for those of you without calculators handy). Unfortunately, this only applies to those commissions that are not going in a sketchbook--these are commissions to be done leading up to the show and will therefore be done on my own paper. Space is limited!
Anyway, hope to hear from some of you and hope to see even more of you at the show. To contact me, email: brihurtt@hotmail.com 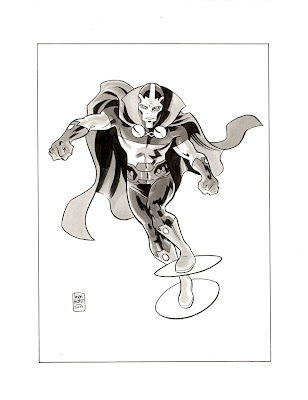 Posted by brian hurtt at 9:52 AM No comments: 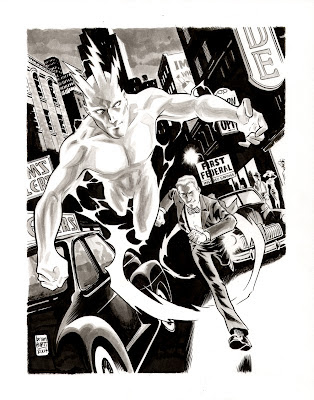 Johnny Thunder and Thunderbolt! I kept hesitating on this commission because I just couldn't get the right composition. It didn't really click for me until I bit the bullet and decided to go with the whole "early 40's" motif.
Hope you like it!
Posted by brian hurtt at 10:46 PM 5 comments: