That's Days of Future Past to all you haters. 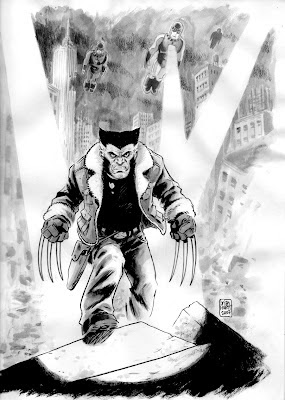 Ain't nothing cooler that old Wolvie sporting those Reed Richard-looking white-walls.This commission was the very last page in someone's X-Men sketchbook that was started sometime back in the ealry 90's and has some great drawings by folks like Steve Epting and John Romita Jr. No pressure at all, right?
I got this commission after the owner of the sketchbook saw this old post.
Posted by brian hurtt at 12:48 AM 7 comments: 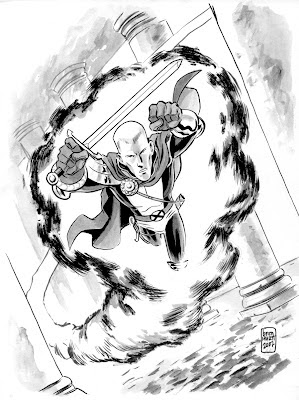 Another Cannonball, circa early 80's Asgardian Wars. Having liked my take on Dani Moonstar from the same story ( see here), I was approached by someone at HeroesCon to do a Cannonball from that classic epic. Unfortunately, I didn't have any reference for him so I had to wing it (see here). As I was doing that drawing someone else came up to the table that basically had the exact same idea. He'd even brought a print-out for reference. It was too late for the current drawing but I could use the reference for his drawing when the time came. After looking at the drawing I was doing, he basically told me to forget about the reference and draw him in the garb I had made up. Just have him "blasting". Easy enough. So, above is the result of this second Asgardian Cannonball drawing. Yee-ha.
Posted by brian hurtt at 7:35 PM 5 comments:

Bring Out The Damned 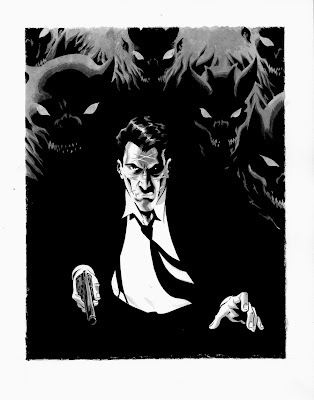 What's that you say? You feel like you really need a solid dose of mobsters and monsters? Well, my friend, you're in luck! The Damned trade paperback is officially in stores today. If you have any goodness in your heart you will rush out and buy this wonderful production brought to you by Messrs. Bunn and Hurtt and the fine people at Oni Press. If you're a really wonderful person you'll buy copies for your friends!
If you have had a chance to read the book, I know that Cullen and I would love your feedback!
Posted by brian hurtt at 2:43 PM 4 comments: 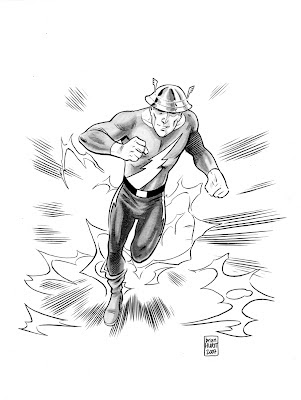 This one is a post HeroesCon follow-up. Being the last drawing on the list I wasn't able to get to it so I promised to take it home and mail it to the owner. I have to admit to being a little apprehensive about drawing the Flash (Golden Age or not) because when trying to draw him in the past I've always had a problem making running look, I dunno--dynamic. To my surprise I think this piece ended up turning out all right.
Posted by brian hurtt at 12:28 AM 2 comments:

First, here is one of two Tara Chace drawings I did at HeroesCon (if whoever I did the second Tara for happens to read this, I would love a scan of that image). It's always fun to revisit Tara, as she was essentially the first protagonist I ever drew in comics. Being my first gig I don't think I did her any justice. So it's always nice to feel like I'm given another shot. 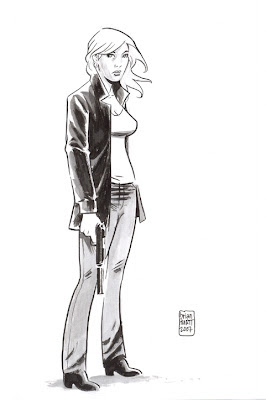 After posting a bunch of con sketches over the past couple weeks I was contacted by someone who said they thought maybe I'd like to post one of their con sketches that I'd done...two years ago. I braced myself, expecting the worse. I usually can't stand to see anything I've done that's more than a few months old. But y'know what? It wasn't half bad. Here's an image of crotchety Crocker sitting at his desk: 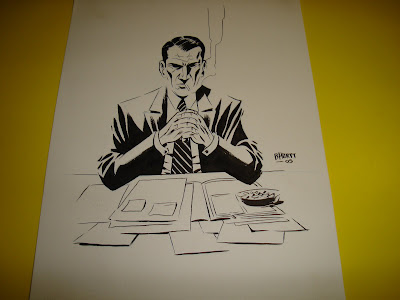 I felt like this post needed one more drawing to feel complete. It's always been a hope of mine that I could do just one more Q & C story. Just about the most fun I've had doing a comic (outside of The Damned) was my three-issue Queen & Country: Declassified story featuring a young Paul Crocker. I've always liked the idea of returning to do one more Paul Crocker adventure. There are too many obstacles that stack up against that ever happening but it's still nice to daydream about. Here is a quick ink sketch of young Crocker that I did at 4 a.m. this morning. I don't think it turned out half bad. 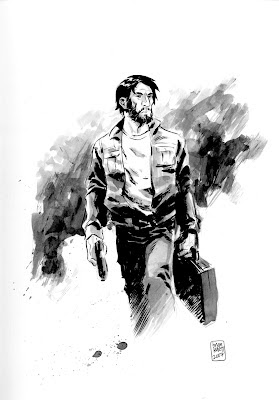