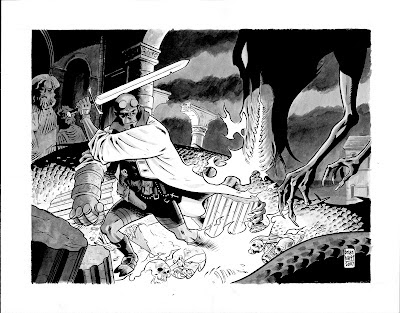 Another really fun commission. This one I decided to try a horizontal approach and I'm pretty happy with the way it turned out. I struggled a bit because Hellboy is always drawn (by Mignola) in an iconic, vertical (think totem pole) kind of way. Does that make any sense? Anyway, I'm happy with the piece and I hope you enjoy it...

A Girl and Her Horse 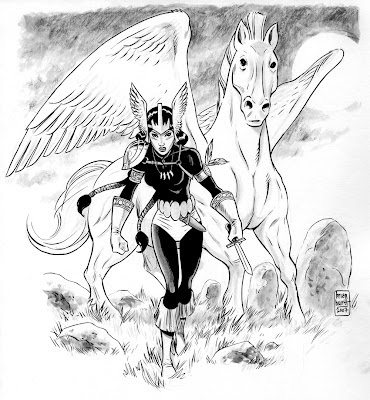 I was pretty excited to get this commission. One of my all time favorite comics as a kid was the New Mutants/X-Men Asgardian crossover. I was already a big Thor fan (the first comic I started reading as an ongoing series) and I had just recently gotten into the X-Men. So you take my favorite mutants and put them in Asgard (realm of the Norse gods, for you unitiated), throw in some awesome Art Adams art and you got yourselves a classic. I read them back to back and at the time it (I was 9 or 10) it was the most epic comic I'd read. I've almost forgotten
what it feels like to be that immersed in a comic book world...trying to think
what in recent years would compare...

Anyway, for those who are familiar with the books you will probably recognize the young lady above. For those of you who aren't, that's Dani Moonstar leader (co-leader? I forget) of the New Mutants. In the story she rescues the steed of one of the legendary Valkyrie (these scary warrior women who pick the heroic dead for Valhalla or annoint the dead on the battlefield...or something. Guess I need to dig those back out and reread them) and is in turn chosen as it's rider (essentially becoming a Valkyrie herself).

Also, interesting to note, this is the first time I ever drew a finished piece with a horse in it. Good on me.
Posted by brian hurtt at 10:35 PM 5 comments:

Went to Kansas City last weekend for Planet Comicon. Met some nice folks, ate some free food, and drew these. All in all a good trip. A nice primer to the con season--FYI: I'll be doing Heroes Con(Charlotte, NC), San Diego, Chicago, Nashville Comic and Horror Con, and Mid-Ohio(Columbus). If you have the chance please come to the show and say hi.

Thanks to everyone who sent along the scans so I could share them. 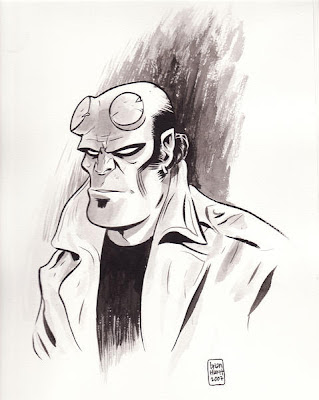 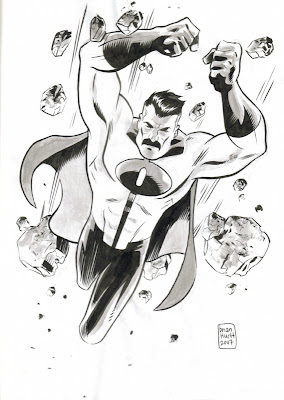 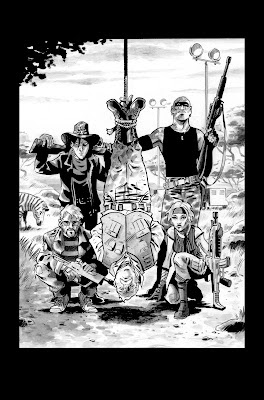 This is an image from a project I worked on over the weekend. Can't really go into details on it (for fear for my life) but I wanted to share this one image with you.
Posted by brian hurtt at 3:57 PM No comments: