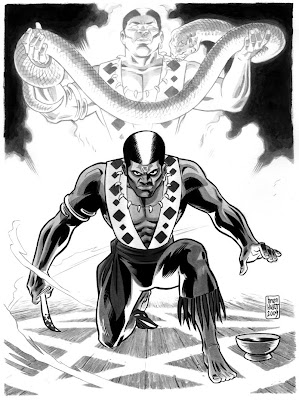 Brother Voodoo--Marvel 70's horror meets 70's Blackploitation! It's a magical mix!
I was telling some friends recently that I would love to do a Marvel comic that takes place in 1970's New York and has a French Connection vibe. I'd put Brother Voodoo in it as well as Power Man, Iron Fist, Doctor Strange, Tony Stark (as if played by Burt Reynolds) and of course a cameo by Dazzler. Marvel should run with this--it'd be like printing money.

Happy Holidays everyone!
Posted by brian hurtt at 8:15 AM 4 comments: 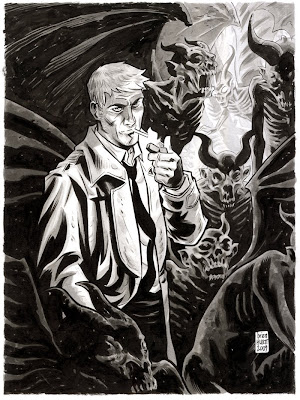 John Constantine, the quintessential occult detective. It has been a long time since I've read Hellblazer and doing this commission really brought back memories of how much I liked the book back in the day. I'm talking 15 year ago, maybe. I read the entire Ennis/Dillon run as well as some before and some after but when they left the title I more or less left with them. I really should go back and pick up some of the later runs.
When I received this request I was actually kind of struck that no one had ever asked me to do a Constantine drawing before. It seemed right down my alley but I can honestly say that I had the hardest time of any commission ever to come up with a composition that I liked. In the end I think it all worked out though. The second hardest commissions? Oddly enough, the ones that feature characters from THE DAMNED (my creator owned series). Can't explain it...
Posted by brian hurtt at 8:52 AM 2 comments:

Them What Ails Ya, Part Four

Did I forget to mention that Part Three was posted last week? Yes I did. whoops.
It can still be found here.
If you are caught up you can make your way to the fourth and final installment of the SIXTH GUN Christmas yarn, "Them What Ails Ya'"! Head on over to the Oni blog to read Part Four.

Stay posted--I should have some new art from the book to share with you in the next week or too! I can't wait!
Posted by brian hurtt at 1:34 AM No comments: 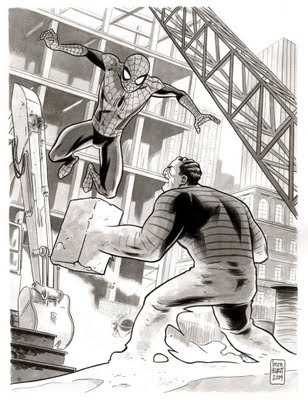 click-it-to-big-it
I love the classic Spider-Man rogues gallery so it was a lot of fun to do this drawing of old web-head going up against Sandman. The biggest challenge was the all grey wash background--it took forever to build up!
Posted by brian hurtt at 3:27 PM 6 comments:

Them What Ails Ya, Part Two

I forgot to mention this yesterday, but in case you
missed it, the next installment of The 6th Gun Christmas story
has been posted on the Oni Press blog!
Posted by brian hurtt at 10:13 AM No comments:

Them What Ails Ya, Part One 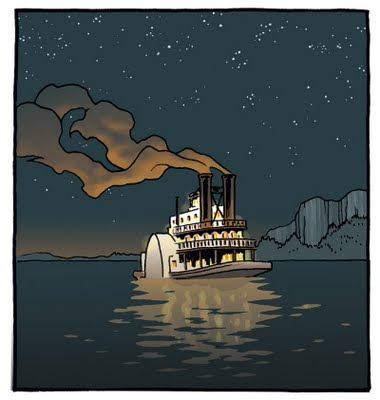 The Sixth Gun is the upcoming full-color, supernatural western from writer Cullen Bunn and myself. Although the first issue doesn't release until the spring we do have a little introduction to this world to share with you. Head on over to the Oni Press blog to see the first of four installments of THE SIXTH GUN Christmas Yarn: Them What Ails Ya. This prose story will come out every Tuesday between now and Christmas and each installment will be accompanied by an illustration by myself.
Hope ya'll like it! 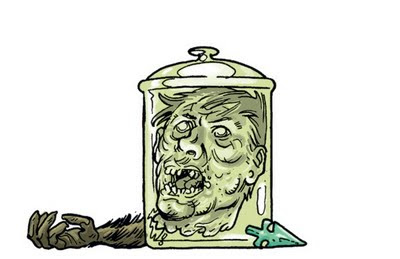