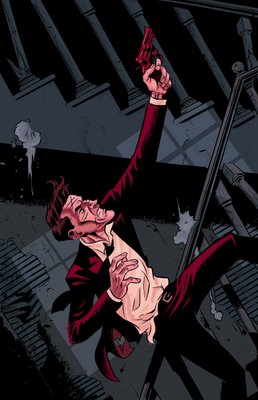 This is late--I meant to post it before it was solicited in the most recent Previews. But, here it is, the cover to The Damned #3. I just finished the covers to 4 and 5 over the past week and I'm really happy with both of them as well. I'll be posting those in the near future. Been a little neglectful of the blog recently as I've been putting in 80 hour work weeks to finish up issue two. Considering how rushed I felt on it I have to say that I'm really happy with the final product--I think the art shows a marked improvement over the first ish. I'd like to post some previews of that ish but I'm struggling because all the really cool art is spoilerish and I wouldn't want to do that to ya. I'll try to come up with something in the next couple weeks, though.
In the meantime, I am Maryland bound! I'll be at SPX this week with the guys from Oni Press. I'm really looking forward to the show--I've been meaning to go for about four years now. Anyway, if your in the neighborhood, please stop by the Oni table and say hi to me and pick up The Damned #1--a week early!
Posted by brian hurtt at 1:47 PM 2 comments: