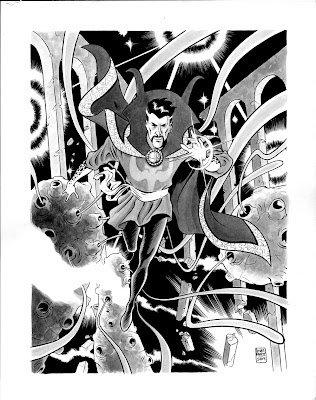 click-it to enlarge-it
Another really fun commission I did recently. I've never been a reader of the Dr. Strange comics but I've always liked the concept of the character and his design so I had a blast doing this piece. It's interesting that along with Dr. Strange, two of my other favorite Marvel characters are fellow Defenders, the Hulk and Silver Surfer, both of whom I enjoy doing my own takes on. Also, like Dr. Strange I've never delved too deeply into either of the characters as a fan (I did read several years of Peter David's Hulk but I don't think I've picked up an issue in 10 years). I've daydreamed from time to time of being able to do a Defenders comic--I think that that could be the type of super-heroe comic I could fit in at.
Back to work now.
Posted by brian hurtt at 5:10 PM 4 comments:

The following four images are all commissions done for Shannon and Carrie, a really great couple I first met this past year in Mid-Ohio. Between the two of them and their friend, Billy, they kept Chris Samnee and myself quite busy this past weekend. Thanks guys! 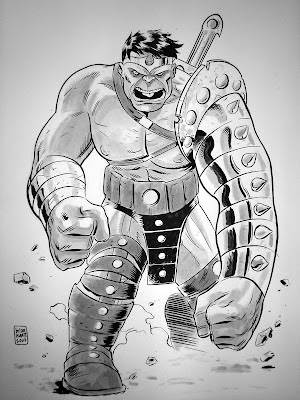 I really don't get the chance to read too many super-hero comics anymore--the exception being Astonishing X-Men, Runaways, and the odd trade that someone loans me. I have to say though, that World War Hulk has almost pulled me in. I've always liked the Hulk and I've always loved John Romita Jr. so I may have to cave and pick this up. I flipped through the recent issue inpreparation for this drawing and it looked like everything I would want it to be. When I originally heard the concept I started fantasizing about drawing the book--this drawing is the closest I'll come to fulfilling that dream. 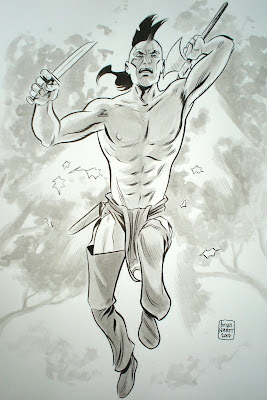 The above and below images were done for Carrie. Leave it to her to give me something out of left field (insert smiling emoticon here). A Mohican and a jet. I loved doing the Native American but part of me would have liked to have seen what this would have looked like in watercolor. The jet (an A4 Skyhawk) is a Navy plane that her father used to fly--the image was to be a Father's Day present. A technical drawing. A gift. No pressure, right? Needless to say I was a little nervous and kept putting off doing the commission until I felt I was adequately warmed up and my drawing arm loose. All that said, I was pretty surprised with myself and the way it turned out. 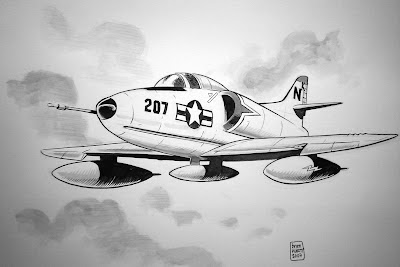 WWII Cap. I was pretty excited to do this piece. The guy has never been cooler than his pre-freeze days. I think it would be cool if instead of Marvel bringing Cap back to life they instead launch a monthly WWII Captain America book. I might buy that--and that's high praise indeed! 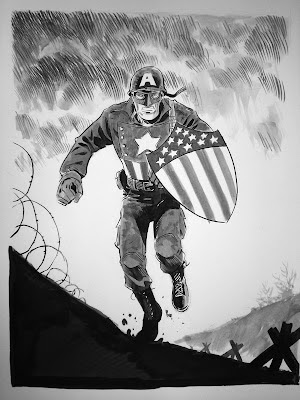 Thanks be given to the folks who sent in scans of their commissions yesterday. Thanks again Karen and big ups to Jim and John!

Also, if the person that I did the Eddie and demons sketch (from the Damned) happens to be reading this could you contact me? I'd love to get a scan/photo of that image.
Posted by brian hurtt at 9:58 AM 5 comments: 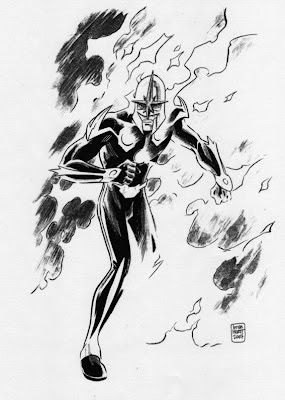 I returned home from Heroes Con to find these commissions already sitting in my email Inbox. Thanks, to everyone who has already sent along scans/photos and those who've promised to do so. I should have some more to post in the next few days. I don't know that there was a single commission I did this weekend that I didn't have a blast doing. Everyone I met was incredibly nice and I thank them for their patience. As was pointed out to me by my table neighbor (Laurea Samnee, wife of Chris), the most common refrain from me was,"What am I drawing for you again? Yeah, it's not done yet." 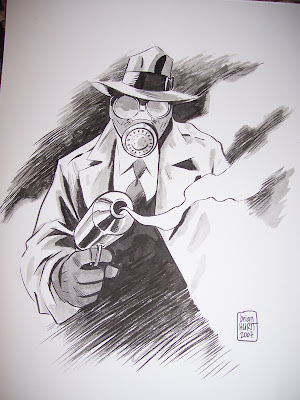 I did learn a lot about how to handle commissions in the future. I was not prepared for how many commissions I would be getting and, because I'm so slow, I ended up drawing through the day (at the con) and into the night (in the hotel room).
New Rule #1: I'm going to be bumping my prices up a bit. As I said in my previous post, I do more than just a pencil, or even a marker, sketch. I ink every commish with a brush and also add ink wash. This tends to take quite a bit longer than a standard commish. I figure if I bump up the price (somewhere around $50--little more a little less, depending on the show) I can afford to take a little more time with the piece and I really feel that folks will be getting there money's worth. As it was, at this show Chris and I had the least expensive commissions, by far. So much so that other artists where coming over to tell us we need to raise our prices. 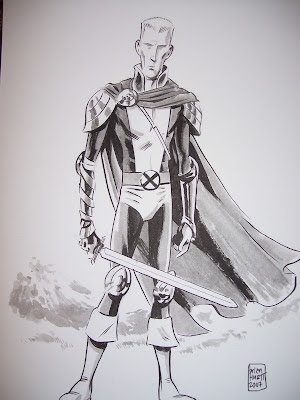 New Rule #2: I will start taking advance orders. I had several people contact me in advance asking if I would be willing to do my commissions in advance of the show. I turned them down due to my heavy workload. Big goof. In the future, I think I will probably offer a discount to anyone who pays me to do their commission in advance of the show. That'll clear me up to take a few extra pieces from the casual, or "impulse" buyers at the show.
New Rule #3: Set myself a (very) modest daily limit. Say, four or five commissions a day (yes I'm that slow). Have a list each morning--first come, first served--and stick to it. This past weekend I had most of my commissions taken within the first hour on Friday. Anything I added after that point I struggled to get to.
So, yes, I feel like a total ass after my last post where I whined about not getting enough commissions at shows and here I am, in effect, complaining about having too many commissions to handle. I'm a boob.

One of the downfalls to working so much last weekend was that I wasn't able to walk around and enjoy the show. It wasn't until my last 45 minutes at the show that I was able run around and try to catch up. There were plenty of people I would've liked to introduced myself to but I had to limit myself. I had gone to the show with the intention of meeting Mike Wieringo--I'm a big fan of his work (and his blog) and it was his advocation of the show over the years that actually brought me there. I did get to talk with him briefly, and he proved to be an extremely nice guy (no surprise). Watching him doing free sketches for folks was humbling--he makes it looks so effortless.
While I was at the show I also discovered that Cliff Chiang was attending. I love this guys work! Again, I got to talk to him all too briefly and I hope that I run into him at some future show. He's one of those artists that other artists love. His work is deceptively simple, kind of in the Alex Toth mode, and his use of black is extraordinary. He's one of those artists, who when looking at their work, I get depressed about my own progress. I understand that this is a common malady of artists--I have this reaction everytime I look at artists I like. 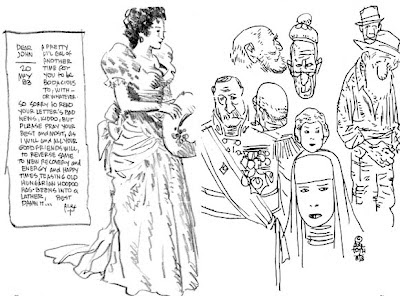 Speaking of Toth, one of the highlights of the show came at the very end when Chris Samnee and I went to this table to purchase a real find-- Dear John: The Alex Toth Doodle Book. It is very hard to find a decent Alex Toth sketchbook and this one is a treat. The first two-thirds of the book is filled with short hand-written letters and doodles to a fan and eventual friend, John Hitchcock. There is also an interview conducted by mail and a section where Toth discusses and analyzes some of his own work. An all round great book. After talking to the man behind the book, John Hitchcock, he let us in on a treat. Out from under the table he pulled out a portfolio binder filled with Alex Toth original doodles and a couple pages. We were both pretty dumbfounded! We leaned as close as we could looking a every stroke of a brush, pen or marker--it was awe-inspiring.
And just plain inspiring--gotta get to work! 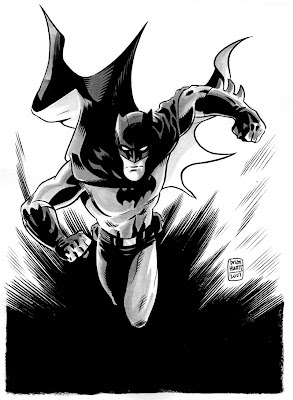 I found this drawing yesterday in a box in the trunk of my car. It's from a month or so ago when I did a mid-sized show in Kansas City. In all honesty, the show didn't go very well for me, so few people stopped by to talk and even less wanted to pay for a sketch. Whenever a show is slow like this I like to break out the tools and do a warm-up sketch. It usually attracts interest and often requests for drawings. Not this time, though. I don't think anyone stopped to watch or talk the entire time I worked on this. Woe is me.
Getting sketch commissions at shows is an important part of attending shows (from the pocket book point of view--I always love meeting the comic fans, of course). There aren't too many ways to make money at these shows (books, prints, etc. come with a higher overhead than ink and paper) and every bit helps. I'm always afraid that when I talk about money I sound like a capitalist mercenary. But the truth is that between travel, hotels, and often table fees, I'd be happy to just break even. I like to think I'm fairly reasonable at the shows, I charge $25-35 (depending on the show) for convention sketches (like the one above) and I put my time into them. All my drawings are inked with a brush and then toned with an ink wash.
Speaking of commissions, I will, hopefully, be staying really busy doing these drawings this weekend when I attend the Heroes Con in Charlotte, NC. I've been wanting to go to this show for the past few years as I've heard it is one of the best shows in the country. I've heard nothing but good things about the show runners and all the people who attend. I wanted to make it last year but I was too late in trying to secure a table--they seemed to go fast. Please, if you're in the area, stop by and say hi to me--I'd love the company!
If you want that Batman above, I will have it at the show this weekend.
Posted by brian hurtt at 12:47 PM 10 comments: