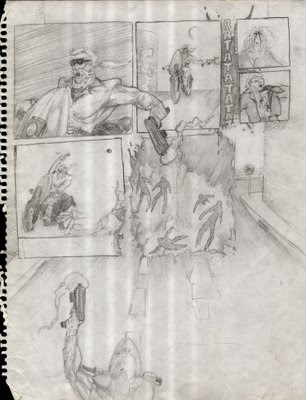 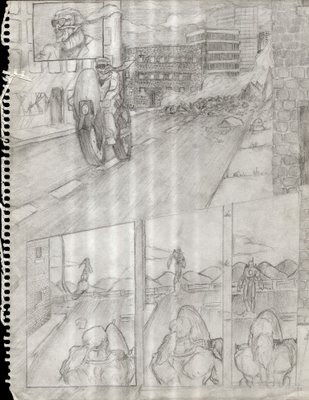 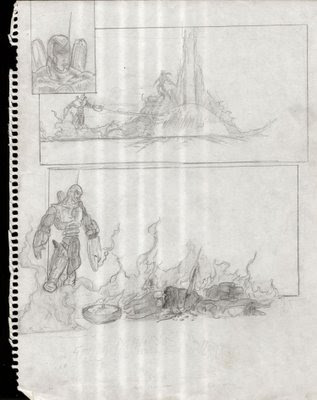 For obvious reasons, the above images made me laugh. These were also part of Star Clipper's 20th Anniversary art show (see prev post). Therefore the above pages were also drawn when I was in 8th grade. The storytelling in these pages is what really cracks me up. It's obvious that I was thinking about the storytelling and the composition...I just came to all the wrong conclusions. The best part is the burnt panel borders on page 01--eat that, Wil Eisner!

Below is my reinterpretation of these pages, done 20 yrs later. It was a lot of fun to go back and reimagine this sequence. Also, this is the first time I've done any sequential work in pen (Microns), instead of brush, and I was really happy with the results.
Hope you like it! 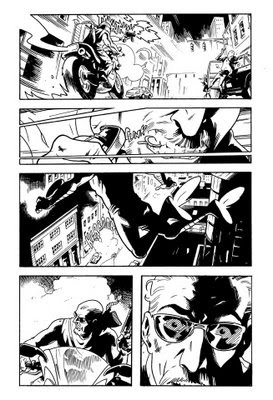 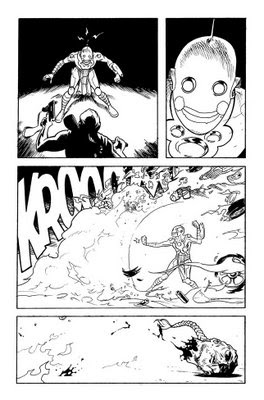 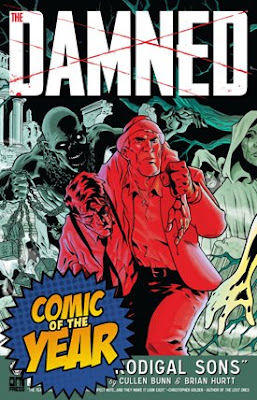 
"I loved the first Damned mini, and when this sequel came out, it not only lived up to the original, but surpassed it. Cullen Bunn and Brian Hurtt expanded on the mythos of their demon-infested 1940s in a way that not only made me want to see more of this world outside of Eddie, his brother, and the mobster monsters of his city, but had me hanging on the edge of my seat at the end of each issue. I was first introduced to Brian Hurtt during his stint on Queen and Country, and while the guy was good then, his work on this series establishes him as one of the best independent artists working today. His crisp black and white art creates an atmosphere that invokes some of the great noir detective/mystery flicks, and his work is totally worth the wait between series. Cullen Bunn’s scripting is sharp, smart, and would translate well to any medium. I’m just thankful we’ve got him in comics. You’d be a fool to not track this book, or the original mini-series, down at your LCS if you missed out on it."
Posted by brian hurtt at 11:06 PM 6 comments:

2008 was the 20th anniversary of my local comic book store, Star Clipper, and to commemorate the event they asked local comic artists to contribute two pieces each for an art show on their premises. The parameters were pretty broad but at the heart of it was the theme of "20 Years". A couple of the artists, and myself, latched onto that and decided to go with the concept of finding pieces that were 20 yrs old and then reimagining them through the lens of 20 years of experience we've had as artists. The following 2 drawings constitute my first piece. I'll post the second one in a few days. 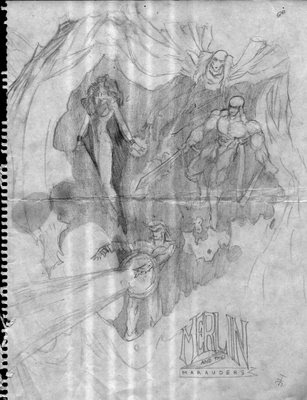 When going through my old drawings I was looking for this above piece in particular. I thought it was drawn about 20 yrs ago and to my surprise and joy, when I found it, it actually had "88" written on the drawing. Slam dunk.
I was in the eighth grade when I drew this and the concept was to take the Arthurian legends (which I, to this day, know very little about--I never let ignorance get in my way) and then, out of those legends, create a superhero team. Thus, Merlin and the Marauders was born!
I don't even know where to start with commenting on this drawing--give me a break, I was 13!

With the following image I wanted to stylistically go in a completely opposite direction to offer a distinct contrast. I wanted to try something in color and I was, in the composition, trying to evoke some static 16th century painting. Only, with pens and watercolor. Anyway, I had a lot of fun reimagining my eighth grade drawing and I was pretty happy with the way it turned out.
Hope you enjoy! 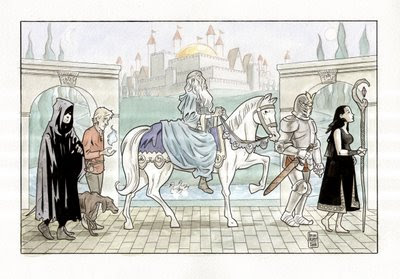 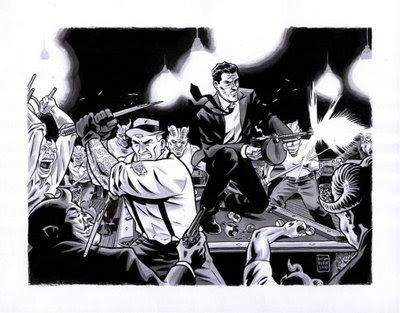 This is how folks used to ring in the New Year back during Prohibition.
Hope your New Year's was a little less violent but just as fun.