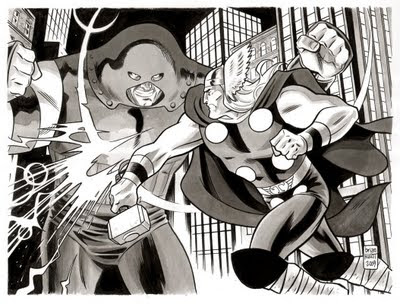 For this commission I was asked to riff on the cover to Thor #411 where the God of Thunder goes up against the Juggernaut. This was a classic from the Ron Frenz era of Thor. As much as I love the Walt Simonson run it wasn't until much later that I came to appreciate the art stylings of Mr. Frenz. He was obviously, channeling Kirby when he worked on this series and he really captured the weight, power, and dynamism of "The King's" art. Here's the original cover to this Clash of the Titans: 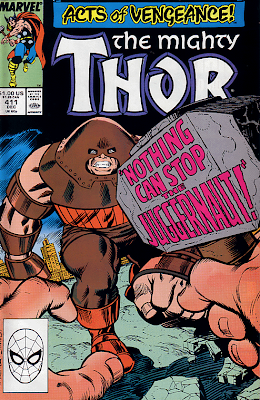 Thor looks amazing, this is such an amazing image man, really, you did something truly beautiful with this one.

Great stuff. And you are right Rin Frenz is very under rated

this is a fantastic rendition of an epic battle! nice work, brian!

Oh Yeah! Great job, Brian! You totaly captured the intensity of a battle between these two!

Good… I liked them its works… congratulations!

Would you mind if I use this image in my "Fight Club"? View here: http://www.comicbookmovie.com/fansites/CBMFightClub/

Access--Feel free to use this image!