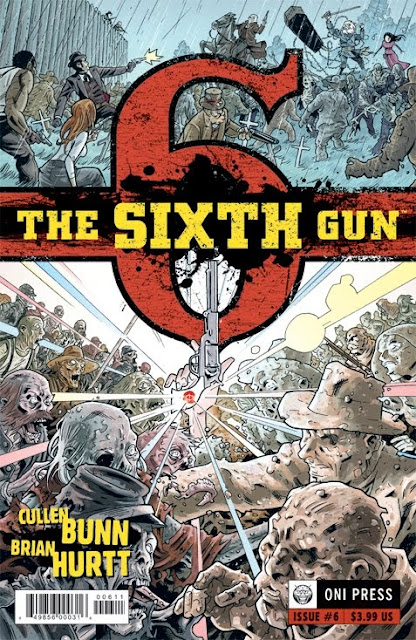 Issue #6 of the Sixth Gun is solicited right now in the most recent Previews.  What the solicitation doesn't tell you is that there are 10 EXTRA PAGES of art and story for the same price as the standard issue.  This is a really cool thing that Oni is doing for a really cool issue (if I do say so myself)!  This is the big finale of the first story arc and we're celebrating it in a big way! Get the word out!
"General Hume is at the gates of the Maw … and he’s brought Hell with him! It’s the final showdown between the forces of good and evil, and no-one is safe. If Drake survives the undead battalion … if he defeats Hume’s malevolent henchmen … he’s still gazing down the barrel of a shoot-out with the Confederate general not even death could stop!"
Posted by brian hurtt at 7:56 AM

You have to figure out how to make all these covers available man. I want them all up in my house they are for real some of the best art work I have seen in all my life.

Anton said it best, "...best art work I have seen in all my life."
hrh

Mykal--so glad you're digging the book! Cullen and I are putting our all into it!
Anton--Maybe someday we can try to at least make hi-res versions available for folks to print up themselves.

How long does it usually take Oni to send their books to trade? Sixth Gun is going to trade right? Hopefully hardcover!

Truly amazing art here Brian. Do you sell any of the original pages from the first six issues? It's truly fantastic stuff.

i just love your work, what you do en the damned and the sixth gun, i hope you can do some wallpapers of that series :D