The Life and Times of Paul Crocker 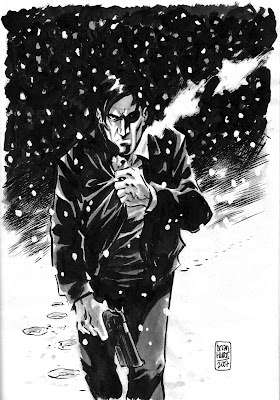 This past weekend I did a small show in Kansas City. I have a handful of commissions to show for it--all of which I'll post over the course of the next week. My friend Chris Samnee also attended the show. Because we were sitting next to one another and because both he and I have worked on Queen and Country we were asked to each do a drawing of Paul Crocker in someone's sketchbook. The catch: I was supposed to draw Crocker 20 years younger than his present day incarnation and Chris was asked to draw him 20 years older. I had the advantage in that, having done Q&C:Declassified, I know what a younger Crocker would look like. Chris' drawing was more challenging. Watch him hit it out of the park here (you might have to scroll down a little--the post is from Monday, Oct. 1). I'd also stay tuned to his site so you can see all the other outstanding pieces he did this past weekend.
Posted by brian hurtt at 1:23 PM

Hey, you knocked this one out of the park, too! Don't sell yourself short. Thanks for the great sketch!

Also, I hope Jim sent you the scan of that Bullseye you did for him--that rocked the party!