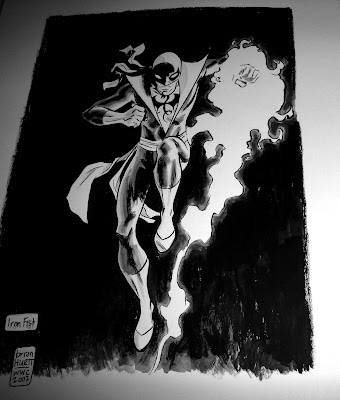 Another commission from the Chicago show that showed up in my Inbox this morning (thanks, Josh!). I was nervous about this one as I was doing it but it ended up turning out pretty good. I think. Josh was kind enough to let me draw him in his 70's get-up. I'm a big fan of some of the 70's costumes and Iron Man and Power Fist were both the epitome of that style. It only made sense that they'd eventually team up.
If you haven't already been checking out Chris Samnee's blog (Samnee rhymes with Omni)--then you should do yourself a favor and head over there. He has posted a bunch of his sketches from Chicago and there are a lot of "beauts" in there. My faves being Harlequin, the Thing, and Ronin Wolverine. In that order.
Posted by brian hurtt at 1:03 PM

Ghost Image said...
This comment has been removed by the author.
11:06 PM

Wow... just wow. Iron Fist is one of my favorites out of Marvel (in any costume) and that is just great.

I have to admit that nobody has impressed me with their visual interpretation of Iron Fist in some tie, but this is a beaut. Nice piece Brian.

Thanks for sendin' people to my blog, Falcon!
This Iron Fist is freakin' sweet!

Hey Brian! Would you please email me at (joeydodd@gmail.com) when you get a chance. I would like to talk to you about a comic shop opening over in Bellville.Thanks man.