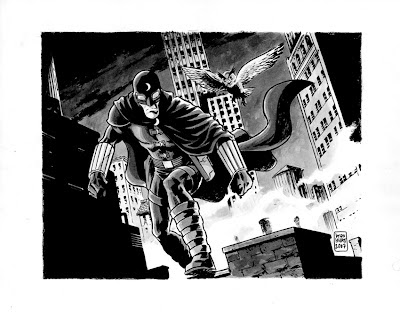 Well, I'm back from the show and I have to say that it was a resounding success. Last week Cullen and I had purchased a case of our books to last us the next few shows. By close of the show on Saturday we had sold out of the entire box. We were pretty happy about that--it had really exceeded our expectations. Because Cullen had to leave early Sunday to get back to town and because I had no books to sell, I took the day off. Sunday was the first day in years that I was able to actually walk around a convention at my leisure and enjoy it as a fan. It was such a relaxing and enjoyable day. I was even able to get home early and still have time to go to the movies (went and saw Stardust--thought it was really good if you go for that sort of stuff).

A great big shout out to the great guys over at Around Comics. They have been really supportive of The Damned from the very beginning. I can't tell you the number of people who either already had the book or picked it up at the show who said that they had heard about it on the Around Comics podcasts and message boards. I think I can say without a doubt that the show wouldn't have been as big a success without their advication. Do yourself a favor and go check them out here.

A reminder and a plea to all who got commissions from me this past week. Just a reminder to those who said they'd send me scans of the drawings--I'd love to post them and have them on file. A plea to those I did not ask to scan the drawings: If you have the capabilities, and the time and inclination, I'd be really grateful if you could send along a scan or digital photo. I was really happy with the quality of the images I did at the show and I'd love the opportunity to share them with everyone.

The above drawing was something I did on a whim last week. I took it to the show and it sold pretty quickly. I had a few other drawings I had brought along that I was also able to sell. I think I'll probably try to have a small batch of pre-drawn material to bring to future shows--it seems to work out pretty well and it also provides great material for the blog.

Yeah, that Dr. Midnite piece is REALLY nice looking, it's no surprise it went fast. Looking forward to seeing some of the commissions from the show!

TCM Hitchhiker said...
This comment has been removed by the author.
2:40 AM

I am the one that bought your Zorro at the con. on Friday.

I absolutely love it man, and it's one of my favorite things I purchased at the convention. It has gotten quite a few compliments from family and friends already. I will be frame shopping this weekend. Thanks again, and keep up the excellent work!

Hey Brian, thanks again for the great Black Cat pic. It was *just* too big to fit on my scanner, but here's what did fit.

That piece went fast because it's effing gorgeous, man! That's why!

I think I really need to commission a drawing from you for myself. How are you at drawing Wonder Woman?

Glad to hear you had a good time at the con.