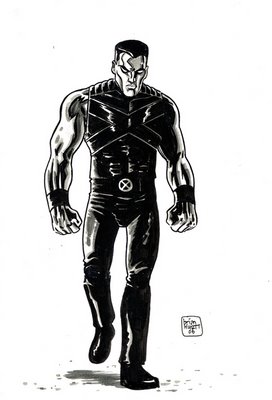 I had planned on posting this sketch before going to see the new X-Men film. Then I received a surprise call this evening from a friend who had passes for an early screening. I just got back from the movie and overall I'd give it a thumbs up, an A- , or 4 out of 5 stars (whatever you're preferred unit of critical measurement may be). Like any true comic and film geek I'm going to have criticisms but I'm not the kind of fan that can't separate the movies from the comic. There's a lot of fun stuff to see here and in my opinion it has one of the best scenes of any of the movies (it's kind of in the middle of the film and hopefully you'll know it when you see it). Dark Phoenix is great, Kitty Pryde and Beast are good, and not enough Colossus. I'm sure I'll be going back in the next week or two.
Oh, and if you do go see it, be sure to stay until the end of the credits.
Posted by brian hurtt at 11:57 PM

Nice! Where you get this guestbook? I want the same script.. Awesome content. thankyou.
»

I find some information here.