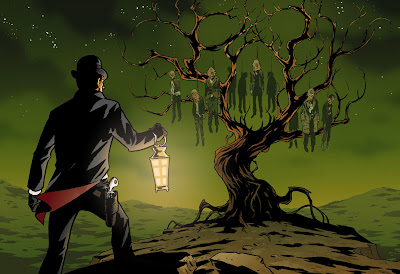 Those of you that have run into me at shows over the last few months have probably had a glimpse at this image (and a handful more) while for the rest of you this will be new. I have been dying to share this (and over the next week even more images) for about a year now! It was finally announced in San Diego this past week that Cullen Bunn and I will be doing a new book, a FULL COLOR book, for Oni Press. I won't talk to much about plot right now--I'll try to let the art speak for itself. Needless to say, this is sort of a dark epic fantasy set in the Wild West. It's a six-issue mini-series and it'll debut sometime in the spring.
First issue is already penciled and half inked.

It's called THE 6th GUN.

The waiting for this book to have a Spanish edition will be a nightmare. I need to read it NOW!

Keep up the good work.

i was lucky enough to see this piece, as well as some of the other pieces you were talking about in charlotte... and i can't wait to see the finished product! keep up the great work, brian!

i'll keep an eye out for it.

Amazing job Brian. It looks like you are having a lot of fun with this project. I especially love the skull outline in the tree. Good work sir.