This was a fun one. Did this drawing of Eddie and Sophie at a convention I attended last weekend. The owner of this drawing was kind enough to send me a scan so I could post it to the blog (I have to say that I'm impressed with the quality of this scan--the tones of the washes are captured pretty well considering how light it was). I really wanted to put this one up because it was the first time I've ever done a strictly ink wash drawing. For my first attempt, and considering I wasn't working in the comfort of my own studio, I think the final product turned out really well. I'll definitely have to do some more of this in the future.
Posted by brian hurtt at 11:28 PM 2 comments:

I had the bright idea that I wanted to redo the cover for the upcoming The Damned trade paperback. The plan was to use the cover from issue one for the trade cover but I did have some minor quibbles. The "major" minor quibble was that the original cover was too still--it didn't get across any sense of action or kineticism (did I make a word up?). My solution was to make Eddie larger and coming at the reader/viewer. So far so good. But why stop there?Why not do a wraparound cover? I've always wanted to do a wraparound but have never had the opportunity. That gave me a whole new dilemma: How do I take an image that was designed to work as a vertical cover and make it work as one half of a larger horizontal cover? How indeed? After much trial and error I came up with the image below. Drawn in pen on two pieces of 81/2" x 11" copy paper. Image size--approximately 13" x 9". Once the fun part was done it was on to the drudgery of enlarging and lightboxing the image. I drew it lightly with a harder lead (2H I believe) so I apologize for the miserable scan. Perhaps if you click on it to enlarge it will be easier to view. Perhaps. That done, it was on to inking. That's funner part...yes, funner (get off my back, I know the proper grammar is funnerist).
This is where the piece really comes together for me. And finally, the colors. Oh, the colors. This was the most difficult part...but only because I had no idea what I was doing. I knew all along that I was going to keep the original color scheme from the issue one cover. Only, I was also aware that I never would have used those colors had I originally intended to make a full-blown wraparound cover. It's too difficult, in my mind, to carry that color scheme through a large "montage-y" piece. But I tried. I'm fairly happy with the final product and I'm completely jazzed about attempting another wraparound--this time working from the ground up. 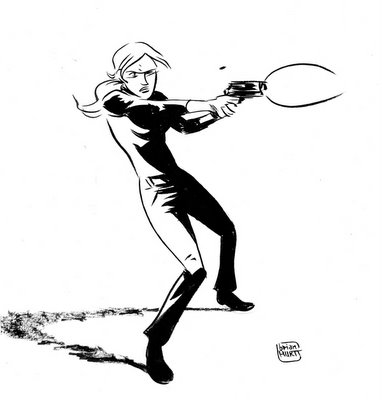 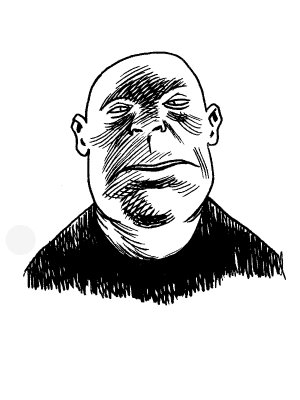